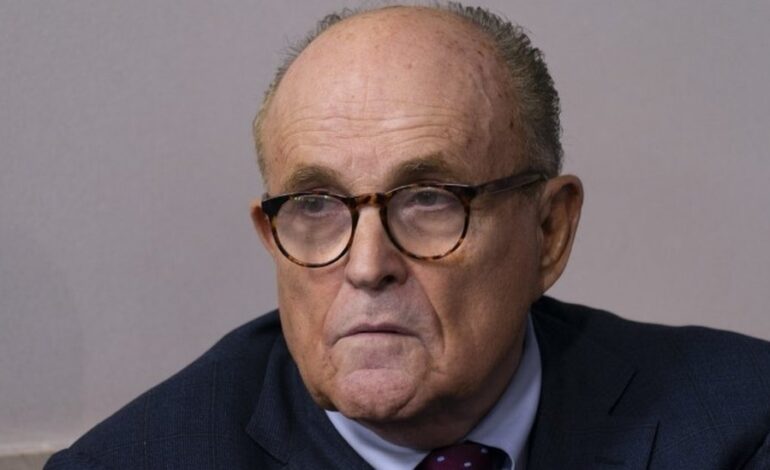 Donald Trump's lawyer Rudy Giuliani has dismissed as a "complete fabrication" a clip from a new Borat film appearing to show him with hands down his trousers.

"I was tucking in my shirt after taking off the recording equipment," the former New York City mayor tweeted.

He was referring to an episode in the film, starring UK comedian Sacha Baron Cohen, where he is interviewed by an actress posing as a TV journalist.

The film – which is due to be released on Friday – is the sequel to Cohen's 2006 hit Borat, where he played a fictional reporter from Kazakhstan.

In the follow-up filmed earlier this year, Baron Cohen again tries to ambush US politicians and members of the public.

The scene with Mr Giuliani sees him being interviewed in a hotel room about the Trump administration's response to the coronavirus outbreak.

The young actress then invites Mr Giuliani, 76, to join her for a drink. After his microphone is taken off, he lies down on the bed and appears to be putting his hands inside his trousers.

Referring to that clip, Mr Giuliani tweeted: "At no time before, during, or after the interview was I ever inappropriate. If Sacha Baron Cohen implies otherwise he is a stone-cold liar."

In July, Mr Giuliani said he had first thought he had been asked to do a serious interview.

"As soon as I realised it was a set up I called the police," he explained in another tweet on Wednesday.

"This is an effort to blunt my relentless exposure of the criminality and depravity of Joe Biden and his entire family."

The Trump camp has accused his Democratic White House challenger and his son Hunter of wrongdoing in regards to Ukraine and China while he was vice-president – a claim Mr Biden denies.

Neither Baron Cohen nor his representatives have so far made any public comments regarding Mr Giuliani's latest tweets about the forthcoming film.

REVEALED: What These Housemaids Do Will Completely Shock You