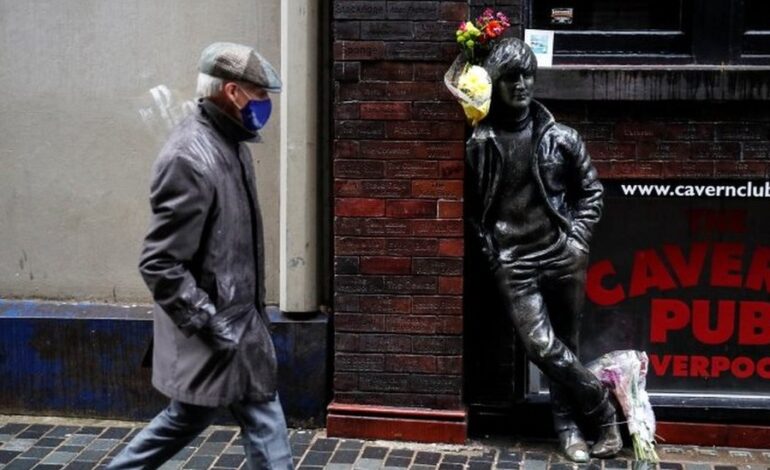 Measures to tackle a rise in Covid cases were "guided by science", the health secretary has said, amid criticism expert advice was ignored.

Documents have revealed government scientific advisers called for a short lockdown, or "circuit-breaker", in England, three weeks ago.

Another 143 people have died in the UK after testing positive for coronavirus.

This compares with 50 deaths announced on Monday and was the highest daily total since 164 deaths on 10 June.

The data also shows another 17,234 people have tested positive for Covid, compared with 13,792 cases the day before.

"We have seen cases increasing, especially in older age groups, which is leading to more hospital admissions. This is a stark reminder for us to follow the guidelines," she said.

The Liverpool region will enter a "very high" Covid alert level from Wednesday, the highest of the new three-tier system for coronavirus restrictions in England.

Every area will be classified as being on medium, high or very high alert under the system. It is not clear what the specific criteria is for each alert level.

Most parts of England are the lowest tier, but Essex has asked to be moved to "high" level restrictions.

Meanwhile, London could be put in a stricter lockdown within days, Mayor Sadiq Khan has warned.

Shielding is not being reintroduced in England yet, but people who were on the list will receive a letter with updated advice to avoid getting Covid.

The latest Office for National Statistics figures showed there were 343 deaths involving coronavirus registered in the week to 2 October – a figure that has been doubling every fortnight over the last month.

As MPs began a debate in the Commons on the three-tier system on Tuesday, Mr Hancock said the virus posed "a formidable threat" until a vaccine could be found.

The government would not rule out further restrictions in the hospitality, leisure, entertainment and personal care sectors, the health secretary said.

He said the government makes "decisions that are guided by the science, taking into account all of the different considerations", adding "protecting our economy and protecting our health are not alternatives", but that action was required to "protect lives and livelihoods".

Documents detailing advice from scientists on the government's Scientific Advisory Group for Emergencies (Sage) were released on Monday night.

Their views and evidence feed into the government's decision making.

He told the Commons: "After the prime minister spoke, we see yet again he is being advised to take action and has so far refused. But it's the same virus, the same delays, the same country and the same government making the same mistakes again."

At a press conference on Monday evening, Prime Minister Boris Johnson said the alert system for England could succeed in driving cases down if it was implemented "very effectively", and he rejected the "extreme route" of a full nationwide lockdown "right now".

But at the same briefing, England's chief medical officer, Prof Chris Whitty, voiced concerns over the impact of the new rules, saying he was not confident the "base measures" in the highest tier "would be enough to get on top of" the virus.

"That is why there's a lot of flexibility for local authorities […] to do significantly more," he said.

Released shortly after Monday's press conference, minutes from the Sage meeting said the advisers had called for the immediate introduction of a short national lockdown three weeks ago.

They also showed the scientists suggested:

Of all the measures proposed by the advisory group, just one – advising those who can work from home to do so – was implemented by the government at the time.

In the document from 21 September, Sage warned that "not acting now to reduce cases will result in a very large epidemic with catastrophic consequences".

It also said a two to three week "circuit-breaker" – a short period of tightened restrictions – could "put the epidemic back by approximately 28 days or more", if it was "as strict and well-adhered to as the restrictions in late May".

"Multiple circuit-breaks might be necessary to maintain low levels of incidence," it added.

A modern browser with JavaScript and a stable internet connection is required to view this interactive.

What are the rules in your area?

Enter a full UK postcode to find out

Speaking to BBC Breakfast, Communities Secretary Robert Jenrick said the government had introduced measures such as the rule of six at the time, and stressed the Sage papers had contributed to the measures the PM announced on Monday.

He said they had taken "balanced judgements" that weighed up the effect on the economy and "all the other unintended consequences" of measures, such as the impact on mental health and delayed surgeries.

On the new three-tiered system, he said: "We are now able to have a very clear and consistent framework across the whole country, so people will be able to understand approximately what the rate of infections is in their own area and what the rules are accordingly."

Cases are increasing across the whole of the country and the number of people in hospital is now higher than before the full lockdown in March. We are at a critical stage in the epidemic.

It is at this moment the gulf between the official scientific advice and the decisions made by government has been laid bare.

It is the case that "advisers advise and ministers decide". When considering new measures to stop Covid, government must also take into account the harms they cause to our health and the economy.

But there is some concern the government is doing too little, too late.

And that we can either choose the terms for controlling the virus now, or wait and the virus will force our hand as it did with lockdown in March.

The government has also defended its latest compensation package for people forced to stop work as a result of new coronavirus restrictions.

Under the programme, those who qualify will get two-thirds of their wages paid for by the state.

Chief Secretary to the Treasury Steve Barclay told the House of Commons that it was a "generous" scheme.

Under the three-tiered system, most areas in England are in the medium alert level – meaning current restrictions continue, including the 10pm hospitality curfew and the rule of six.

Areas already under additional local restrictions are automatically in the high alert level – meaning bans on household mixing indoors are extended to include hospitality venues.

The city of Nottingham, which has the highest rate in the country, will start in this category alongside the rest of Nottinghamshire, East and West Cheshire and a small area of High Peak, as well as Greater Manchester, parts of South Yorkshire, and north-east England. Around 4.4 million people will be in high alert areas.

The Liverpool City Region – home to 1.5 million people – becomes the first area to enter the very high alert level, which – at a minimum – sees pubs and bars close if they do not serve "substantial meals", almost all household contacts banned and advice against travel. The rule of six will continue to apply in outdoor public spaces such as parks.

Areas in the highest tier are able to impose further restrictions, and in the Liverpool City Region this will mean the closure of betting shops, gyms, leisure centres and casinos.

The government has issued details of the full restrictions for each alert level.

Meanwhile, the Scottish government is drawing up its own three-tier framework of restrictions to be implemented later this month.

In Wales, a second national lockdown is being considered and First Minister Mark Drakeford has threatened a travel ban on people from English Covid hotspots if the prime minister does not impose his own.

A further 13,972 confirmed coronavirus cases were reported across the UK on Monday, with 50 more deaths within 28 days of a positive test recorded.

Footballer's girlfriend shares a pic of her dog nibbling her breast