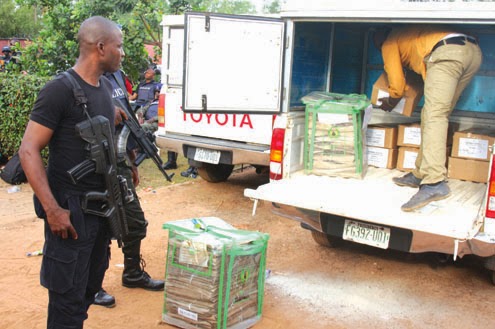 SUBVERSION OF DEMOCRACY AND THE PEOPLE’S RIGHT:PDP’S ELABORATE RIGGING PLAN FOR OSUN GOVERNORSHIP ELECTION UNCOVERED!
Fortuitously, the All Progressives Congress (APC) in Osun has uncovered a very damning ‘secret’ document on how the People’s Democratic Party (PDP) intends to rig the August 9th gubernatorial election in Osun.

In the document, marked boldly as ‘CONFIDENTIAL’, a copy of which is now in the possession of APC, the program of the PDP to rig the Osun election plus the projected results from the rigging exercise have been highlighted. A summary of the plan is as contained in page 1 of the document which reads as follows-

De-register 47,000 by deleting their names from the Register. This is to disenfranchise them on Saturday.

Programmed ballot paper designed. By this, the import is that the voting becomes distorted in favour of the PDP through a chemical process.

Programmed thumbprint. This is being done with a view of accounting for the lacunae created between those disenfranchised and those that failed to turn up for voting.

Impression on the ballot papers. Vanishing ink on the programmed ballot paper. These two processes are part of the grandplan to manipulate the process through scientific rigging.

In preparation to harvest the brazen electoral heist being planned by the PDP, the document also outlines the pre-alloted scores for all the 30 Local Government Areas as follows: 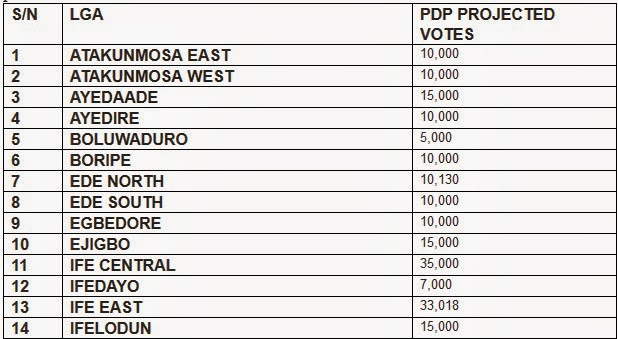 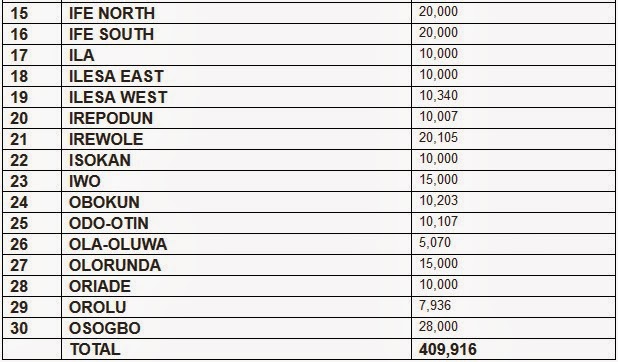 The document further contains a meticulous outline of plans to rig the election Polling Unit by Polling Unit using pre-programmed ballot papers already designed, and thumb printed with vanishing ink in favor of PDP. The document further contains the plan to deploy specified numbers of impression ballot papers and vanishing ink in 1,195 polling units across 155 wards in all Local Government Areas in Osun. This, by their machination is expected to award the PDP a whooping 406,916 votes even before voting commences!

This elaborate and audacious plan is to be carried out in connivance with key INEC officials from the National headquarters, and those deployed from other states with staunch backing of all security agencies deployed for the election, with particularly mobilized personnel, former militants and masked thugs impersonating security officials under a combined team code named ‘Election Task Force’ directly under the instructions of Mr. Musiliu Obanikoro (Minister of State for Defence) and Jelili Adesiyan (Minister of Police Affairs), Mr. Femi Fani-Kayode and Mr. Chris Uba mandated to intimidate and harass APC party chieftains, agents and sympathizers who are uncompromising or refuse their offer of filthy lucre.

Evidently, PDP’s repeated boasts that it would capture Osun is predicated on this grand plan. This cannot be regarded as an empty boast considering the chronicle of recent PDP ‘abracadabras’ in Delta Senatorial, Anambra governorship and Ekiti governorship elections. All these points to the fact that PDP’s devilish plans to destroy our nascent democracy would stop at nothing to achieve its aim.

We hereby put all stakeholders on red-alert. We call on Prof. Jega to ensure that his name does not go down in infamy as some others have. We also call on the new IGP, Mr. Abba and other security agents to show to Nigerians that they are truly professional and men and women of honor. We appeal to all Nigerians and particularly the Osun electorates to be extra vigilant and ensure that, their will is not subverted by this on-rushing brigade of evil. On our part, we shall put all machinery in place to safeguard the mandate of our teeming supporters as we shall resist all forms of intimidation or devilish manipulation of the voting process.

According to our source, in the unlikely event that the above fails, violence must be unleashed on the people so as to forestall the announcement of the winner. In furtherance of this, Chris Ubah has been allocated fifty soldiers to terrorise , intimidate and maim the Osun voters. Additionally, to compliment this act of brigandage, three hundred thugs are camped by Omisore at Ballam Hotel, Bolonduro and are with unclaimed voters card.

Wow! Meet this 100-year-old bridesmaid who stole the show at a wedding (photos)

MUST READ: The Real Story Behind The Sudden Death Of Nollywood Actor, Muna Obiekwe Featured

This couple got blasted after being engaged, see why (photo)