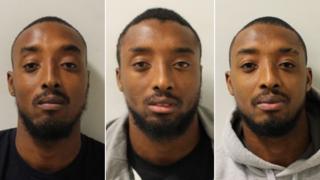 Identical triplets have been jailed after DNA linked them to a plot to supply an "extremely dangerous criminal" with an Uzi sub-machine gun.

DNA found on a handgun linked it to either Reiss, Ralston or Ricky Gabriel but it was impossible for police to prove which brother it belonged to.

However, an investigation revealed all three were involved.

The 28-year-olds, from Edmonton in north London, were sentenced at Blackfriars Crown Court.

Ricky and Ralston Gabriel, who are both semi-professional footballers, were found guilty of conspiracy to possess firearms and ammunition with intent to endanger life in July and each jailed for 14 years.

He was jailed for 18 years.

Armed police found an Uzi sub-machine gun with a silencer and ammunition and a loaded pistol on courier Hamza Ahmed, 21, after stopping a taxi in Tottenham, north London, on 10 April 2017.

The DNA recovered from the pistol was not attributable to just one of the triplets, as they shared almost identical DNA.

Detectives carried out an extensive investigation to find out which of the brothers was involved in handling the firearms – but mobile phone and surveillance evidence revealed it was all three, the court heard.

The brothers were the final three of eight individuals charged over a plot to supply weapons.

Prosecutor Kerry Broome said: "An Uzi sub-machine gun is clearly an extraordinarily serious firearm. It is not capable of any lawful use. It has the capability to cause maximum indiscriminate harm.

"The pistol was loaded. They were both ready for immediate use."

The firearms were meant for Aron Thomas, 32, who was caught with another loaded revolver and ammunition when he was held on 26 April 2017.

At the time, he was on licence, having been released from an 11-year prison sentence for opening fire at random towards a crowded street near Wood Green Tube station in 2010.

Thomas, from Holloway, was jailed for life with a minimum term of 14 years last year after he was found guilty of two counts of conspiracy to possess a firearm with intent to endanger life.

Ahmed, from Archway, north London, was jailed for 16 years for one count of conspiracy to possess a firearm with intent to endanger life in relation to the first incident.

Middleman Elyace Hamchaoui, 23, from Arnos Grove, north London, was sentenced to 14 years in prison for the same charge.

Joshua Miller, 27, of no fixed address, was jailed for 17 years for conspiracy to possess a firearm with intent to endanger life in relation to the second incident.

5 Reasons You Are Yet To Find A Serious Man