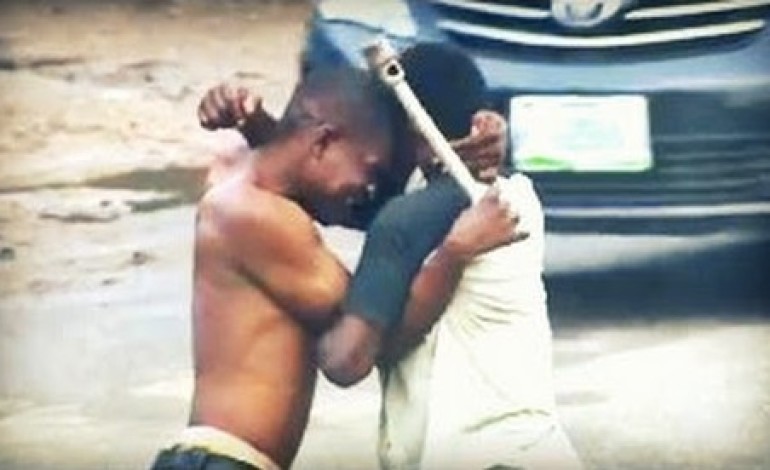 The kind thing "love" dey cause ehn…na wa o! A 25yrs old casual worker, Raphael Nwoye, went on the rampage on Tuesday in the Ajao Estate area of Lagos, stabbing a 33yrs old colleague, Ifeanyi Onuoha, to death for daring to insult his girlfriend.
It was so bad that he even injured two others who tried to make peace during the fight.
It was learnt that Onuoha was stabbed in the neck and in the back at Niyi Ogunbameru Street after the suspect claimed that he had been rude to his lover, identified only as Ngozi, on several occasions.
Nwoye, who was one of the casual workers who usually offloaded containers, had had an altercation with him a few weeks back over Ngozi and had warned the deceased to desist from insulting his lover.
It was learnt that on Tuesday, when Onuoha, also a casual worker, came into the area to see whether there were containers to offload, there was a fresh argument over the same Ngozi.
It was said that Nwoye, who had a knife in a bag he carried, rushed at Onuoha and stabbed him in the neck and in the back.
An angry Nwoye was said to have allegedly stabbed the two peacemakers who tried to stop him, prompting a resident to quickly alert the Ajao Estate Police Division of the bloody fight on the street.
Onuoha, Kenneth and the third victim, whose name had yet to be ascertained, were said to have rushed to the Isolo General Hospital. While Onuoha died before reaching the hospital, the two others were said to be receiving treatment.
The suspect, Nwoye, has been arrested by police. He's cooling off inside a police cell. Prison waiting…
Read More

'She was beautiful, intelligent, caring. She was everything to us' - late Sarah Fagbenro's mother

Brazilian drug lord serves his time in a 'VIP cell' that had a library, plasma TV, 3 rooms and an en-suite bathroom