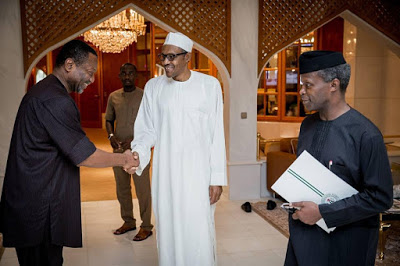 According to PDP, the Buhari-led administration is just paying lip service to the issue of diversification of the economy. The party said this while reacting to a recent comment by the Minister of Finance, Kemi Adeosun, that the only way Nigeria can get out of this present economic recession is to diversify the economy and also maintain fiscal discipline. Read the party's statement signed by its Director, New Media, Deji Adeyanju, after the cut…

"Yesterday, the Minister of Finance, Mrs. Kemi Adeosun, stated that the Muhammadu Buhari administration will focus on two policies to remove Nigeria from recession- fiscal discipline & diversification. Firstly, we believe a recession is not reversed by diversification. A recession is reversed by implementing a stimulus package designed to cut taxes, reduce the cost of doing business & boost spending on infrastructure & other critical sectors of the economy. Available data shows that the Buhari administration has spent a meagre 19% of the allocation for CAPEX in #Budget2016. This sort of spending will not make any sort of impact on the economy. Assuming but not conceding that Mrs Adeosun is right, the challenge is the past 15 months show that despite the glib talk the Buhari administration is doing neither. For instance, despite claims of weeding out ghost workers from the payroll & reducing the civil service wage bill, Nigeria’s wage bill increased from N1.65tr in 2014 to N1.83tr and N1.71tr in 2015 & 2016 respectively. These figures represent a combined total increase of N240bn from the wage bill in 2014. Two days ago, the Central Bank of Nigeria (CBN) released its economic report for Q2 2016 which showed that the FG incurred a N1.09tr deficit for the quarter. This deficit was 96% higher than the N555.49b allowed. Total expenditure for this period stood at N1.76 trillion, surpassing the provisional quarterly budget estimate by 12.8%, representing a 58.1% increase of the Q1 expenditure. 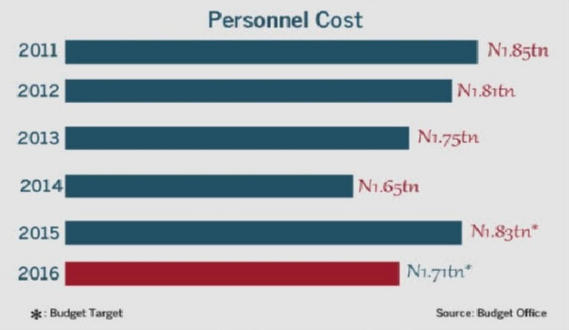 These figures show an abject lack of fiscal discipline in the management of the Nation’s finances by the Buhari administration. On diversification, GDP figures released by the Nigerian Bureau of Statistics (NBS) yesterday show that the Buhari administration is doing significant harm to non-oil sectors of the economy. Some of those figures include: Non oil GDP contracted by -0.38% in Q2 2016 from -0.18% in Q1 2016 and 3.46% in Q2 2015. Furthermore, CBN figures show that non-oil export fell by 43.2% to $576.97m in Q2 2016. As the data shows, even sectors that experienced growth in Q2 have slowed considerably compared to Q1 2016 & Q2 2015. As these figures show, the Buhari administration is just paying lip service to the issue of diversification & is in fact worsening the non-oil sectors of the economy. These figures also show that Mrs. Adeosun’s comments about fiscal discipline & diversification are empty rhetoric. We reiterate our position that this government is out of depth & is incapable of reversing the economic recession into which they have plunged our nation. God bless Nigeria, especially in these difficult times.

Actress Yvonne Jegede: My Boobs are too Big for my clothe to cover, it's not my fault

SEX Is Very Good For You, Beyond The Pleasure [DETAILS]