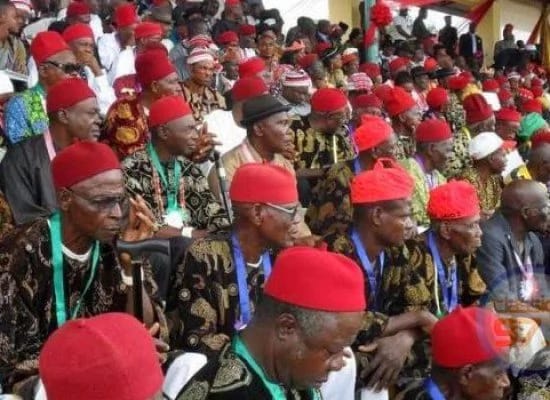 Editor’s note: Igbos have been living in Lagos for a long time and have also contributed their quota to the development of the state.

In this opinion by Clement Udegbe, he argues that the moves made by Governor Akinwunmi Ambode indicates that the governor and by extension Lagos is hostile towards Igbos, He urged them to move towards developing Igboland.

Lagos is not for Igbos

The new plan by Governor Ambode is to either force Igbos to go and start buying lands in Badagry, Ikorodu, Epe and other areas in the hinter lands; build houses and markets to develop those areas, or go back to the South East as Governor Fashola told them to do after the deportation of Igbos in 2013.

The risk in this new plan is best captured by an Igbo proverb that says when a child starts planning to eat plenty fresh vegetable, the vegetable also plans how to give the child diarrhoea.

No one, including the owners of Lagos, can say what Lagos will look like without Igbos, or what Igbos will do if they have to be forced to relocate.

However, some Igbo traders may foolishly rush to those areas and start fresh struggles to own land and develop them, thereby repeating the same mistake they made after the civil war. These ones will always see themselves as wiser than the rest. They are the ones who often boast to themselves that they spent huge sums of money just to sand fill some deep swampy areas in Ojo, Abule Egba,Okota, Ejigbo areas, etc, before building. They forget that the cost of sand filling alone would have given them three mansions or more in their dry Igbo land.

Igbo elders must work towards development of Igboland

An Igbo proverb says that wisdom is like a hand bag: you pick up yours as you go about your affairs. But it appears many Igbos forget theirs in their villages with respect to Nigeria! They have this mind set, attributable to after effects of the civil war, to settle outside their state, no matter how close.

Igbos and the strange interest in developing other places

For example, Igbos strangely prefer to go and buy lands, build and live in Asaba and its environs, and commute to their markets stalls and shops in Onitsha, while neglecting all that vast good land from Ogbaru, to Aguleri and their environs. Many Igbo buy swamps from Port Harcourt, Elele, etc, in Rivers State and develop them, while neglecting the solid land around Owerri and Aba. They prefer to congregate again the same place where they lost abandoned properties after the civil war. The Imo State Governor is not ashamed of the craters that have rendered the Imo portion of the Portharcourt – Owerri Road impassable since he came to power over five years ago.

Similarly, his Anambra counterpart looks the other way as his people suffer untold hardship traversing just between Awka and Enugu, a distance of less than 80 kilometres. The governors of Enugu and Ebonyi have also failed to do the needful about the failed portions of their link roads. Only God knows what the people of Ebonyi go through daily to link up with other parts of Igbo land, and Nigeria in general. Igbos participate and invest in huge sea port development programmes in neighbouring states, while neglecting the vast ocean front they have in Azumini area in Abia State. Indeed it is baffling why Igbos have failed or refused to develop their own zone with the same zeal they put in other zones.

While no Igbo man has made it to the list of the world richest, it is obvious that there are factors militating against them as a people. And until they wake up and address these factors, they will continue to run from pillar to post whenever their host governments sneeze! This is why the new Ambode plan against Ndigbo in Lagos is a welcome development. Perhaps it will make them to begin to think differently and to reconsider their ways in Nigeria.

It will help them to rediscover that Igbo spirit that existed in the days of Zik of Africa,Dr. Michael Okpara, Dr. Akanu Ibiam and a host of other Igbo patriots who worked assiduously with other patriots from the South West and the South South to create the Nigeria that the Military and their political friends have worked equally hard to undermine since 1966, barely six years after our independence.

A word is enough

It will perhaps make Igbos realise that no matter how long the crocodile remains in the water, it can never become a mangrove tree. No matter how long they may live in Yorubaland, Tivland or Hausaland, they will remain Igbo people. And until something fundamentally revolutionary happens, Nigeria, as I see it, cannot do without ethnicity and religion. I pray that a new movement that will not be polluted by these two cancers presently killing Nigeria will start someday.

The Ambode plan is not fair and kind, and Igbos must take it seriously to avoid the enslavement it implies.

The Holy Bible, which over 80 percent of Igbos believe in, declares that affliction shall not arise a second time against the righteous. And given the obvious religious agenda of the ruling APC, Igbos must find ways to re-engineer their own society and reduce the Pull Him Down Syndrome among themselves.

The Lagos State government has not hidden its dislike for Igbos. So Igbos should develop a strategy now to survive within the context of one Nigeria, or be pushed into the ocean!

When your best friend leaves you, or pushes you to the wall, you either fight back, take a walk from the relationship, or re-strategise to live without him. Yorubas, many of who are good friends to Igbos, will stand to benefit more in the face of this unprovoked aggression, especially in the event that Igbos relocate not less than 40 percent of their investments to Igbo land within the next five or six years.

Igbos need to come together and plan on how to create the foundation for a true Igbo mix within their South East Zone, such that qualified Igbos can be appointed into relevant political offices within Igbo land.

President Muhammadu Buhari has continued to show that he does not need Igbos, and that should encourage Igbos to plan to live better after his exit from power, whenever that may be. Igbos can do it, because failure to plan, is planning to fail.

This opinion was written by Clement Udegbe

This opinion first appeared in Vanguard

Your own opinion articles are welcome at info@naij.com — drop an email telling us what you want to write about and why. More details in Naij.com’s step-by-step guide for guest contributors.

US Finally Agrees to Give Out Experimental Drup, ZMapp

Woman Caught Having Time With Co-tenant In Bathroom, While Husband Watched TV