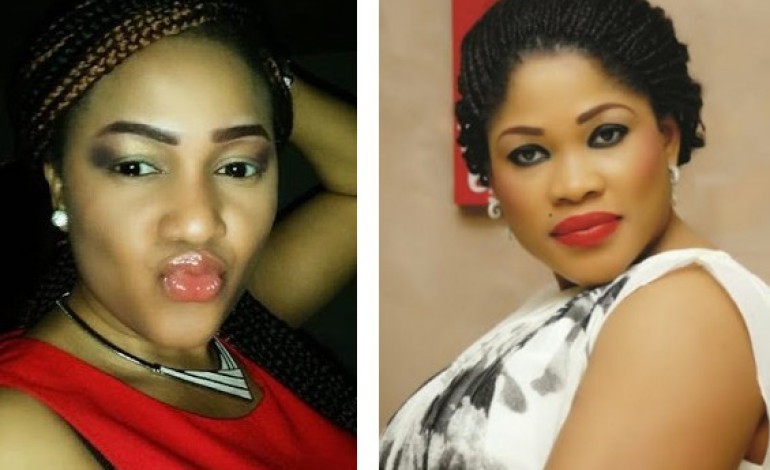 As a lady, it’s not easy to be approached for relationship by a man you really like, most times the guys who express interest in you are not people you will want to date. So, whenever you meet the right one and starts dating, you don’t want another lady to come close. All bitches must back off..Lol!

Same scenario played out with popular Yoruba actress Bisi Ibidapo -Obe and Alaba Olatunde who was then a fresh actress. The lady has revealed how Bisi stabbed her while she just came out of the bathroom with only towel all because of her boyfriend. Women wahala! Read the details…

In a recent chat with a reporter, Alaba said: “I almost dated one actor/movie director, but I got my fingers burnt because his girlfriend then, Bisi Ibidapo -Obe caught us and dealt with me seriously; I still have the marks on me.

“It was the popular actor/movie director who asked me out and we got very close. But before we could get any further, Bisi, who was one of his girlfriends, came to meet me at a movie location in Abeokuta. On that day, I just had my bath and was just coming out of the bathroom; in fact, I was just tying my towel. She was so furious and started shouting that I should leave her boyfriend alone! But before I could say anything, she had brought out a syringe from her back and stabbed me several times in the buttock. I was quickly rushed to a nearby hospital. But I thank God I survived it.”

When asked if the case was reported to the police, the actress said; “No, it was resolved by the elders in the industry. She was asked to apologize and she did. But we are no more friends. Her so-called boyfriend never reckoned with her afterwards. She thought I was the one preventing her from having a swell time with the guy, but she didn’t know it was another actress.”
Love & Sex

Sex is important in a relationship. If you can't f* well, keep your love' Maheeda

Muna’s Death: We Can’t Help Anyone Who Is Not On The Plan – AGN

Kim & Kanye’s Pastor- “They are followers of Jesus,I believe in their marriage”